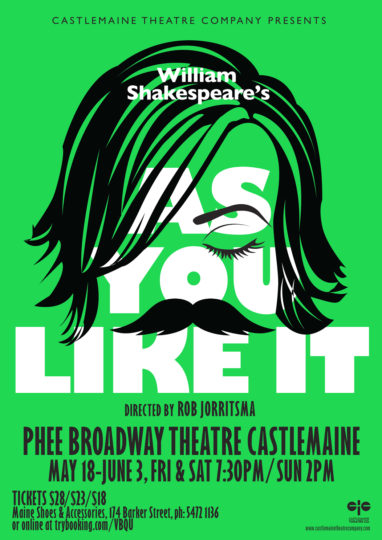 performed at The Phee Broadway Theatre

Fridays and Saturdays at 7.30pm/Sundays at 2pm. Box Office opens 30mins before the show starts

“Just saw, nay! – experienced As You Like It by The Castlemaine Theatre Company. It was brilliant! Flowing, effervescent, modern and accessible. If you’re afraid of Shakespeare, just read a synopsis of the play before going, then let the skills of the players (and director and support crews) convey the richness, humour and delight that is this production. Thanks CTC, again!”

“I thoroughly enjoyed Shakespeare’s As You Like It performed by the Castlemaine Theatre Company this afternoon. Did the play justice, whilst staying relevant to a modern audience. Interesting costumes and simple but innovative set design. Good fun and good acting – I highly recommend it.” Audience member

“Seven of us saw this and it is brilliant!! I would urge you to go and see it.” FB comment

“Truly spectacular show! I’d recommend it to everyone” FB comment

We are very excited to be taking on one of the Bard’s works for the very first time in the history of the Castlemaine Theatre Company. As You Like It is one of Shakespeare’s best-loved comedies, which means that it’s whimsical, and at the end, everyone ends up married, rather than dead. Which is good.

Director Rob Jorritsma (who directed The Peach Season for the CTC in 2015) is an expert in Shakespeare, having worked for many years creating Shakespeare plays with young people at Castlemaine Steiner School.

Central to the play is the love story between Rosalind and Orlando. They fall in love at first sight, but things are not that easy. The backdrop for their journey is drawn by two feuding brothers. The friendly Duke Senior has been banished and usurped by Duke Frederick and now lives in the Forest of Arden, a lovely place of transformation – a tree-change indeed. Rosalind is Duke Senior’s daughter. Forced by circumstances, Rosalind and Celia (Duke Frederick’s daughter) leave the court, accompanied by the clown Touchstone. They go in search of Duke Senior in the Forest of Arden with Rosalind dressed as a boy and Celia as a country girl. Orlando also leaves for the forest, fleeing from his brother Oliver who plans to kill him. In the forest we meet other characters as well. There is the melancholy Jaques (he’s got the famous ‘All the world’s a stage’ speech), then there’s the singer Amiens and some shepherds and country folk. A lot happens before the comedy comes to a joyful ending with multiple marriages. Rosalind has the honour of delivering the epilogue and thanking the audience. Our production will have a contemporary setting, showing the difference between life at the court and in the forest. As Duke Senior puts it:

‘And this our life exempt from public haunt,

Sermons in stones, and good in everything.’