The Tempest Podcast About Us Get Involved Memberships and Donations

Creating together as writers, directors, cast and crew, CTC kicks off the New Year with a theatrical journey through the streets of Castlemaine, stopping in 5 locations to partake of punchy scenes that give three cheers to the people, past and present, who’ve made Castlemaine a more compassionate and caring community.

We know we’re in troubling times but for this performance, let’ turn our gaze away from what’s wonky to see what’s working. Like a cactus flower blooming in the desert we’re starting 2022 with a feel-good show!

We are looking for directors, actors and crew to be involved; email castlemainetheatreco@gmail.com to register your interest!

The Tempest, An Audio Project, is heading to the airwaves of MainFM and will be broadcast in 4 parts starting on September 22. We are also hosting an exclusive listening event which will be a unique experience, read about it here.

Coming soon is an original piece of work that is currently in development, called Walk With Us: Untold Castlemaine. It will be a celebration of our town and we hope you will get involved!

We are moving into new premises at 35 Etty Street, Castlemaine! As of April 2020 we are thrilled to call the old Castlemaine Secondary College Drama Studio at the Etty Street Campus, our HOME! Yes, we have been almost ten years in the wilderness, a wandering troup of players…our garages have been filled with sets and props and archives, and finally we can put everything in one place AND have the wonderful studio to rehearse in. We are leasing the rooms from Castlemaine Hotrods, who have taken over custodianship of half of the old campus, and will be sharing it with other amazing local creatives.

2018 saw numerous CTC actors feature in a music video for The Chris Harold Trio’s track ‘Breaking Bad’. The actors, directed by CTC President Kate Stones include past CTC President, Ken MacLeod, Michael Treloar (As You Like It, Arsenic and Old Lace), Clare Shamier (As You Like It, Gallipoli The Musical), Yen Kong (Monkey and the Monk), Kirstie Babbage (Dirty Work at the Crossroads, Let’s Kill Agatha Christie), and Morgan Kurrajong (Monkey and the Monk, Let’s Kill Agatha Christie). Featuring Deb Hall AKA Miss Evie AKA The GoGo Gorilla. We had so much fun with this vid, hope it comes across in the finished product! Here it is!

We are proud to present the first CTC documentary, It’s not the Destination but the Journey: The Making of Monkey and the Monk, produced and directed by Karen McMullen:

‘It’s not the destination but the journey: the making of Monkey and the Monk’ was accepted into the 2017 Auckland International Film Festival. The film tracks our 2015 production, and provides a heart warming document of the history of the CTC. The Monkey and the Monk project was supported by The Regional Arts Fund and Mount Alexander Shire Council.

PREVIOUS POSTS on this issue:

Ongoing Community Lock Out at The Phee Broadway Theatre

As of August 2017, negotiations with the Mount Alexander Shire Council have opened up, and the Council have declared their intention to have the Theatre once again available to community groups. The wheels of bureaucracy turn slowly, however we are cautiously hopeful that we may be back in the venue in 2018.

In April 2017 our two Shire Cultural Development Officers resigned from the Mount Alexander Shire Council. This came at a time when we were on the point of resolving the problem of community accessibility, after 2 years of negotiations. The executive team have rejected the outgoing CODs proposal and currently are offering no alternative solutions. Read an article outlining the issues here

What’s happening with the Phee

and here’s a radio interview with CTC President Kate Stones and Suzanne Donnisthorpe on her show ‘Hearsay’, Main FM on 4 May 2017

The Arts written out of The Council Draft Plan – TIME TO SPEAK UP!

The Mount Alexander Shire Council have published a Draft Council Plan for 2017-21. Despite many local artists and arts workers reporting at the community consultation events, the draft contains NO MENTION OF THE ARTS anywhere in the document. This is shocking given the Council’s spruking of Mount Alexander as a cultural destination where arts play a key role in our community connectedness, our identity and out economy. We need to speak up about this. Council are offering their draft up for public comment until May 24 2017. PLEASE SUMBIT A RESPONSE! Here’s where to find the draft and make your submission:

Here’s my submission, feel free to use it as a basis for yours:

In Feb 2016 Matt Sheehan, artistic director of local musical theatre company 3’s A Crowd, submitted a petition/proposal to the Mount Alexander Shire Council, signed by the CTC committee and other concerned locals.

In 2015 MASC announced that from now on all hirers of the Phee Broadway Theatre would have to pay $50 an hour on top of the original booking fee for a duty technician to be present at the theatre at all times during the booking. This has effectively locked the CTC and many other community groups out of the venue. It seems that after having publicly stated 12 months ago that “90% of the usage of the Phee Broadway Theatre was for ‘lecture style performances'” MASC is now taking steps to turn that fiction into fact, with the Theatre apparently being handed over to the Goldfields Library, seeing as they don’t have to pay any hire fees or pay the new duty technician fee.

Please write to the Councillors if you are concerned about this issue. If you don’t think it’s that important, please read my letter to the Council (above) and understand why this is such an important issue for our community.
Don’t let Council dumb down our energy and creativity and agency! Do you want to be ‘lectured’ at, ‘lecture-style’? Or do you want a chance to witness and participate in the drama of life!?

Please feel free to plagiarise my letter and article. Here is a link to the addresses of all the Councillors. 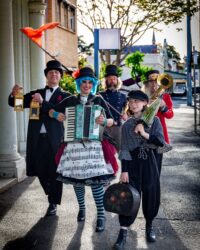