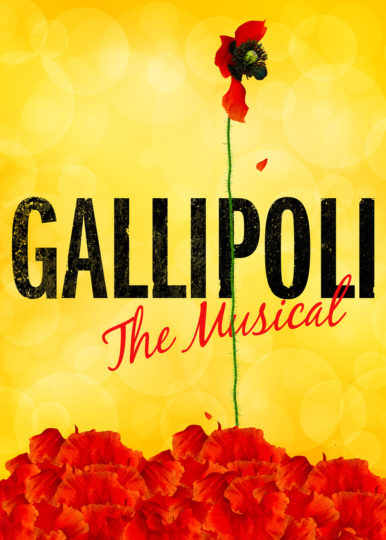 The title of the show ‘Gallipoli, The Musical’ by local writer and theatre maker, Mark Penzak has caused some brows to furrow and wonder, ‘What the…?’ Well, for starters, it’s not a musical in the traditional sense of the word, however it does have wonderful incidental music composed by Mark Anstey, (the brains and the brawn behind Lot19). The cast includes Charles Affleck (composer, Monkey and the Monk), Simon Birdsall (The Full Monty), Hector Mackenzie (CTC newcomer), Lynne Jolly (My Fair Lady), Michael McMahon (The Ghost Train), Elaine Matheson, Lindsay Matheson (Cat on a Hot Tim Roof), Tim Ratcliffe (Aftershocks) and Clare Shamier (Peach Season). Featuring Kenneth MacLeod as ‘Slim’ Hope, the last surviving Digger to serve at Gallipoli. Gallipoli the Musical is a riotous comedy, but it has a serious and thoughtful message about the commercialization of the ANZAC legend. It follows the story of Stumpy, Bluey and Sunny, 3 hapless shearers who have written a play called Gallipoli, The Massacre. Having failed to secure Australia Council funding they are seeking corporate sponsorship for their project. They happen upon the wheeling, dealing Carrie Trust, an advertising executive, who brings The Wool Board and The Hope Mining Corporation into the project as partners. The script weaves together warmth, humour and political satire in an affectionate framing of the ANZAC legend, casting a witty yet critical eye over the commercialization and commodification of the Gallipoli narrative.

The legend of Gallipoli continues to be remodelled today, reports Ruth Pollard in the Sydney Morning Herald: “Mustafa Ataturk, [was] the Turkish commander at Gallipoli, founder of the modern, secular Turkish republic, and its first president…There definitely seems to be a move in certain political circles to reduce the role of Ataturk and increase the motivation of Turks at Gallipoli to be fired by their belief in Islam, to say they looked on it as a kind of holy war.”

Gallipoli the Musical touchingly and humourously highlights the spirit of mateship and egalitarianism that underpins the truest and most humane aspects of the ANZAC story – young men of many different nationalities, with big dreams, thrown together in tragic circumstances, that left life-long scars on them as individuals, and on our national culture.

“It’s a great honour for me to direct a play that features the wonderful talents of our community. Mark Penzak’s script is a joy to interpret, and Mark Anstey’s score brings a whole new delicious dimension to the production. The cast is top notch, featuring some of my favourite ‘old hands’ of the CTC, and some exciting new talent. Gallipoli the Musical really encapsulates the vision of the CTC, supporting local artists and honouring our traditions, whilst pushing new boundaries where we can.” Kate Stones, Director

“This play is a humdinger. The depth of emotion that some of the cast have to feel and convey is palpable. The giggles are infectious. I’ve loved discovering the work so far and the history and present day significance of what the ANZAC legend is, and the director, Kate, has helped me form a 3 or 4-dimensional character for my role.” Michael McMahon, plays ‘Sunny’

“It’s been such a great time with this super cast and amazing script – discovering our characters and the complexities of human nature. It’s so great to be working with the Castlemaine Theatre Company again!” Clare Shamier, plays ‘Carrie Trust’

“This play is not satirizing Gallipoli or mocking the sacrifices made by that generation of Australians. The opposite. I have great respect for them. They not only fought the battles of war but the battle for Federation, the 8 hour day, voting rights to women and I believe, laid the foundations for that nebulous but nevertheless real concept of a ‘fair go’. In my imagination then, I don’t believe they’d approve of today’s erosion of worker’s rights, privatisation of medical services or the growing impression, particularly if you’re renting, that our fair go society has gone. Nor do I believe they’d approve of Gallipoli being commercialised or used to promote obligatory patriotism. Remember, they voted twice during the war not to introduce conscription. I wonder too what they’d make of us having fought an additional eight conflicts since The Great War. Gallipoli the Musical isn’t questioning their sacrifice, it’s questioning whether we’re living up to it.” Mark Penzak, Author, Gallipoli The Musical

NB The last surviving ANZAC soldier to serve at Gallipoli was Alec Campbell who died in 2002 at the age of 103. The characters in the story of ‘Gallipoli, The Musical’ are entirely fictional, and do not represent any real people living or dead, and do not reflect in any way the life of Alec Campbell. The CTC regards the courage and sacrifice of all service men and women with the utmost respect.

Mark Penzak works as a playwright, actor and theatre-maker for both adult and youth productions. Over his 30 year career he has created about two dozen productions which have toured around Australia, overseas and have been seen by a around half a million children. He has written, performed and directed cabaret, stand-up comedy and highly visual storytelling. Mark holds a BA (Theatre/Media) from Charles Sturt University, a Masters of Design (Film/TV) from Edinburgh College of Art with performance studies at John Bolton, Philippe Gaulier and at the Desmond Jones School of Mime in London. He also co-directs Such As They Are with Eliza-Jane Gilchrist, a company that creates highly visual productions that fuse puppetry with specially designed installations. Mark’s work has featured in numerous Castlemaine State Festival productions. Mark and Eliza live in Campbells Creek.

Kate Stones has recently completed an MA in Directing for Performance at the VCA. She directed ‘No Hands’ for the Castlemaine State Festival (March 2017); in 2016 she devised and performed a solo work, The Quiet Bite at The Melbourne Fringe (North Melbourne Town Hall Festival Hub). She co-directs The Red Room Theatre in Campbells Creek, a collaboration with partner Kenneth MacLeod. The Red Room’s acclaimed production of Purgatorio by Ariel Dorfman, featured in the 2015 Castlemaine State Festival. Kate has worked for the CTC as director/project manager for Monkey and the Monk (2015), she directed Burqa (2013). She has performed in and production managed numerous CTC productions.

“It’s a great play! I was brought to tears, laughed and laughed, stewed over big corporate and moaned like a dying soldier. Jam packed!” Renee Kelcey fb Nov 14

“Tell the director it’s a hit! They should make it into a movie” John Stanton, 12 Nov

“Hey there, just wanted to say big thanks for the show last night. I really enjoyed mulling it over on my drive back to Natimuk. So much amazing content in there but somehow the show keeps all the threads contained and manageable for the audience. Delivered with a special mix of professionalism, heart and energy. Well done!” Kate Finnerty