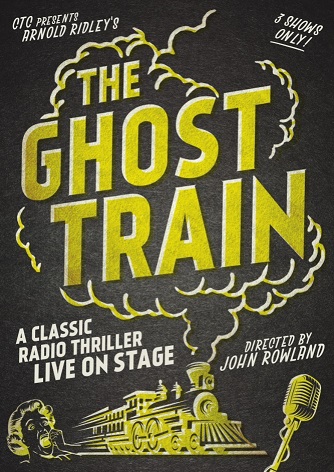 The Ghost Train is coming to Faulder Watson Hall in Barker Street, Castlemaine for three shows only – Friday 9th and Saturday 10th December at 7:30 pm, and Sunday 11th December at 2:30 pm. Tickets are $20 / $15 concession. To book your tickets head to our Ticket Sales page and follow the links.

Take eight actors, two microphones, and an assortment of doors, sandbags, bird whistles, cabbages -and the power of imagination – and discover the magic of radio theatre with Castlemaine Theatre Company’s upcoming show, The Ghost Train. Difficult as it may be to imagine, prior to the arrival of TV and the world wide web, radio theatre was the leading form of home entertainment. Often recorded live in front of a studio audience and broadcast to the nation, in radio theatre actors had only their voices to bring characters to life. A small crew performing live sound effects created an atmosphere that kept audiences captivated.

For its first venture into the world radio theatre, CTC has chosen The Ghost Train, a classic radio thriller written in 1923 by English actor and playwright, Arnold Ridley, who is best known for his portrayal of Private Godfrey in the British sitcom Dad’s Army. Set in the waiting room of a remote railway station in rural England, a group of rail passengers stranded overnight are faced with the spectre of a phantom locomotive said to haunt the line, leaving death in its wake. Naturally, all is not as it seems!

Charged with bringing The Ghost Train to the radio theatre stage is CTC guest director, John Rowland. In a broadcasting career of over 40 years, John has of produced and directed countless radio plays in both England and Australia, working with many legendary actors of stage and screen. Lending their voices to The Ghost Train’s cast of colourful characters are newcomer Gus Saunders, as well as familiar CTC faces Michael McMahon and Louise Osland (both last seen in Monkey and the Monk) and Donna Steven (Playhouse Creatures, Aftershocks, The Donohue Sisters). We also welcome the return of Vyv Rodnight (Aftershocks), and Stephen Mitchell and Daniel Keohan who brought their own shows to CTC’s New Blood season in 2012. We are also thrilled to welcome back Three’s a Crowd actor Michael Treloar, who last performed with CTC as a teenager back in the 1980s!