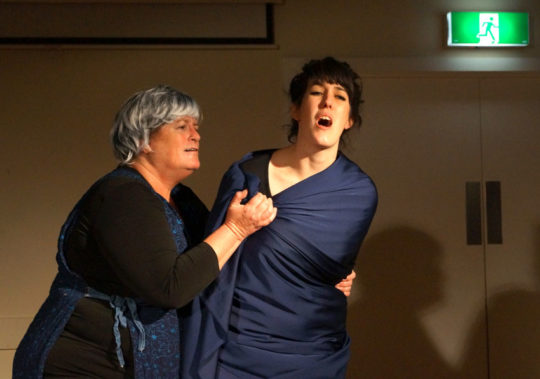 Burqa is a new work written by acclaimed local author Ian Nash, author of the award winning Challenged Trilogy (CTC 2011). Burqa is directed by Kate Stones, and performed by Bairbre Williams and Briega Young. It tells the story of a young Anglo Australian woman who has fallen in love with a Muslim man. Much to the dismay of her mother, she has decided to convert to Islam. She is found at home bent over a sewing machine making herself a hijab and jilbab (headscarf and gown). During the course of the play her mother argues feverishly to try to persuade her to change her mind. Eventually she hatches a cunning plan to thwart her daughters desires. It’s a play about multiculturalism and mother/daughter conflict and competition….Burqa will be performed on Friday 23 August (after Embers), Saturday 24, Thursday 29 and Friday 30 August at the Senior Citizens Centre, Mechanics Lane, Castlemaine. Tickets ($10) will be available on the door, join us for a glass of wine and an informal discussion of the work after the show, no pre-bookings.

Meanwhile a new super heroine has emerged from Pakistan….read all about Burka Avenger in the New York Timeshttp://www.nytimes.com/2013/07/29/world/asia/this-heroine-wears-burqa-in-battle-against-evil.html?_r=0

Writer/director Ian Nash has an interest in giving voice to characters who are in some way marginalised. His recent works make a study of women who do not conform to traditional expectations of stereotypical female behaviour. A graduate of Stanford University Creative Writing Centre, Ian is the author of many plays including A Boy For Me, A Girl For You (Melbourne Theatre Company), Burnout (The Open Stage, Melbourne University), Little Eva (Carlton Courthouse), Show of Strength, Stone Talk and Horse Talk (La Mama). In 2010 Ian directed Tapestries for the Castlemaine Theatre Company. Tapestries became part of the Challenged trilogy, which toured the One-Act Play Festivals in Regional Victoria, where it enjoyed considerable success. Tapestries gained nominations in the Best Original Play, Best Director and Best Overall Production categories, whilst its performers, Anna Davies and Bev Geldard achieved Best Actress awards at the Ballarat and Anglesea Festivals. Associate Professor Kim Durban from the University of Ballarat commented that Tapestries ‘invokes the cry of the soul’ and that Nash handled the subject matter with ‘heart and compassion’.

Kate Stones is an actor and Secretary of The CTC. Burqa will constitute her debut as a solo director. She has performed for the CTC in New Blood (as Rosie Donahue in The Donahue Sisters for which she was nominated for Best Supporting Actress at the Kyneton One-Act Play Festival); as Toinette (and Musical Director) in The Hypochondriac (2011); and as Ida Rheingold in Dirty Work at the Crossroads (2010). She runs a small independent theatre company – The Red Room – with her partner Kenneth MacLeod. Kate co-directed and performed in their production Emilie’s Voltaire which premiered at the 2011 Castlemaine Fringe Festival, and went on to tour to the Kyneton Town Hall, and to the Engine Room in Bendigo (July 2013). Kate is currently studying at Verve Studios in first year Professional Actors Studio.