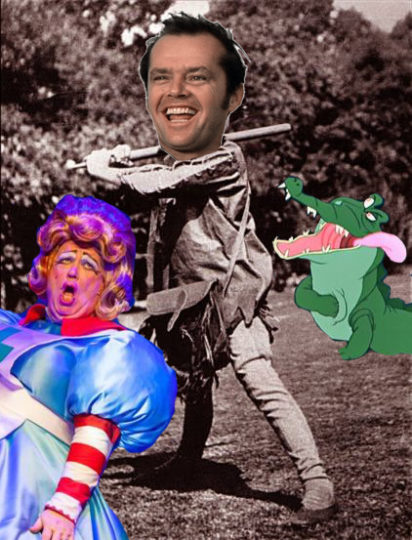 or One Flew Over the Second Star on the Right, adapted and directed by Kate Stones

This is the story of Peter Pan told in the form of a traditional Pantomime. Which means a Dame in drag, plus lots of audience participation, local references and slapstick humour. A traditional aspect of Panto is that characters from different stories can show up. We’ll be drawing on One Flew Over the Cuckoos Nest to source our Dame (guess who!), and find other places to weave in themes from the iconic movie/novel. JM Barrie will no doubt turn in his grave! We will also interrogate outdated aspects of the story, the ‘Redskins’ will be a local footy team, the Pirates will be female, and Wendy will be a child prodigy animal psychologist. Our story begins in the youth psych ward of Castlemaine Hospital…oh yes and there will be a few songs.

Peter (can be played by a male or female), Wendy, John, Michael and the Lost Kids will hopefully be played by young people aged 14-30. Or those who can play ‘young’

There are 6 Lost Kids, any gender ID is fine

Instead of ‘Redskins’ we will have Castlemaine’s Magpies footy team, with Tiger Lily their captain. Can be male or female. Minimum 3. Any gender. As much diversity as possible amongst them.

Captain Hook is the leader of the Pirates. Middle-aged female

Other main pirates include Smee and Starkey (all female, any age)

Tinkerbell – A sassy man in a sharp suit

Nurse Ratched (our Dame) – male actor, large stature. Should be played butch rather than overly camp

Production week and performance dates (you must be available for all these dates):

plus additional Sundays as required (approx. 3)