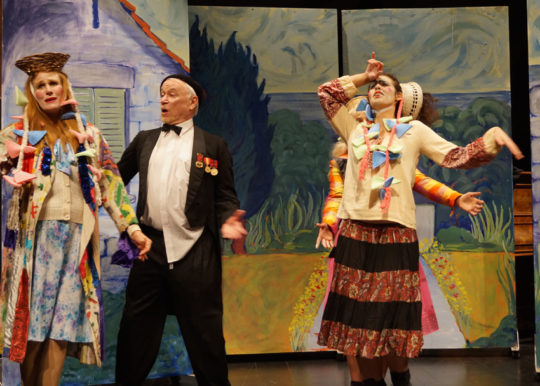 Our first show of the year was an Australian favourite, Cosi by Louis Nowra, written in 1992. This popular black comedy has become a mainstay for community theatre both because of it’s large cast with a variety ages, and good balance of gender roles, and because it reveals the drama of creating theatre from the ground up with limited resources, against the odds. The play is set in 1971 against the background of the Vietnam War, in a Melbourne mental institution. A young director, Lewis (the character is based on Nowra) has been charged with producing a play with the patients, as part of a therapeutic program ‘to get them out of their shells’. One of the patients Roy has decided that the play they will produce is Mozart’s comic opera, Cosi Fan Tutte. None of the patients can speak Italian, much less sing – indeed, some can barely speak. To make matters worse the venue is a fire-gutted theatre with a leaky roof and faulty wiring. The cast includes a pyromaniac, a junkie, a knife-wielding romantic, a confused realist, a Lithium-addicted pianist who hates Mozart and a stuttering ex-lawyer who refuses to take part in the production. Lewis, needless to say is slightly discouraged by the task at hand. Nowra’s humour exposes weakness and stupidity, it ridicules our prejudices and popular institutions, but it is not exploitative or gratuitous. Writer Frank Gauntlett has claimed that ‘when Louis Nowra places his fruitcake-rich, riotously funny, beautifully conceived play Cosi in a Melbourne madhouse, he has less to say about life within the rubber walls than without.’