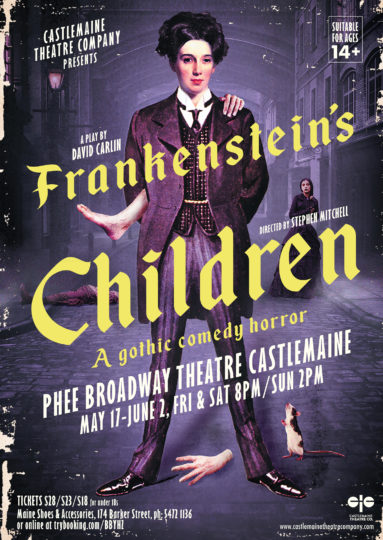 “What amazing talent and the attention to detail was fabulous”
“Magnificent production”
“Standout performances, super effective set, and entrancing, shocking story, dotted with relieving humour”
“Thanks for a great night’s entertainment. Brilliant set, lighting & performances. Fantastic work!“
“I’ve been thinking about your play all morning. There was so many layers to it and so many
surprising and thoughtful details.”
“a strong brave show “

Young and well-to-do, Anne Sheridan is buzzing with the enthusiasm of scientific enquiry. Rebelling against her mother’s ambitions to marry her off, she disguises herself as a man, James Selfridge, and enrols at London’s School of Anatomy. There, James’ scientific ideals are corrupted by an elite order that traffics in human bodies with no moral qualms. Caught up in the commerce of flesh between the surgeons and street folk, s/he falls in love with prostitute Polly Chapman who has enterprisingly sold her body to science many times over. As 19th century science marches on with the successful passing of the ‘Anatomy Act’, can James save Polly from the mercenary surgeons under the leadership of the arrogant Sir Astley Cooper?

After studying Community Theatre at the University of Tasmania in the 1980s, Stephen worked as an actor in Hobart and Adelaide, as well as in numerous backstage roles including stage manager, lighting designer/operator/rigger. As a scriptwriter, he has had plays staged in Melbourne and Sydney and a radio drama produced by ABC Radio National. In 2001, he won an AWGIE for his SBS teleplay ‘Wee Jimmy’. After a 20 year hiatus he returned to acting in 2010. In 2012 he directed and performed in ‘The Local Stigmatic’ for Castlemaine Theatre Company, and appeared in the 2016 production of ‘The Ghost Train’ and 2018’s ‘As You Like It’.

I saw Frankenstein’s Children at the 1990 Adelaide Festival. An original work by Red Shed Company, its inclusion in the main festival program was a thrilling coup for a small, local theatre collective. I knew many of the people involved and it was not without a degree of jealousy that I attended a performance in the authentic period surroundings of the East End market. Whatever envy I brought with me was obliterated by the marvellous, funny, poetic, intriguing theatrical work that they produced. I loved it.

To the best of my knowledge, the play has only ever been performed in Australia one other time. When I tracked down a copy of the script 28 years later, I wondered whether it would live up to my memory…It was better. Indeed, I find it extraordinary that writer David Carlin delivered such a wonderfully resonant, moving, astute work in his debut full length play. The story brims with rich characters full of humanity and subtlety. The writing is an actor’s dream, mixing well-observed vernacular with passages of simply beautiful prose, moving from hilarious comic interludes to heart-breaking romance, combining classic gothic horror with incisive political commentary. And it frames it all with a succession of traditional ballads sung by the show’s one woman chorus, the oh-so-fittingly named Penny Dreadful. I am very excited to bring it all to life (perhaps with a bolt of lightning!) on the Phee Broadway stage with Castlemaine Theatre Company.

Associate Professor David Carlin has a long and decorated career as a writer and creative artist and is currently co-director of the nonfictionLab research group at RMIT. Frankenstein’s Children was his first play, written in 1990 as a founding member of Adelaide’s dynamic Red Shed Company and performed in that year’s Adelaide Arts Festival. Since then, David has written many more plays, films and books. He served as Associate and Show Director of Circus Oz for a number of years, as well as Artistic Director of Red Shed Company, Arena Theatre Company and Melbourne Worker’s Theatre. He was also founding partner, producer and director with Cracker Night Films.

These rehearsal photos were taken by Julie Millowick