Monkey and the Monk 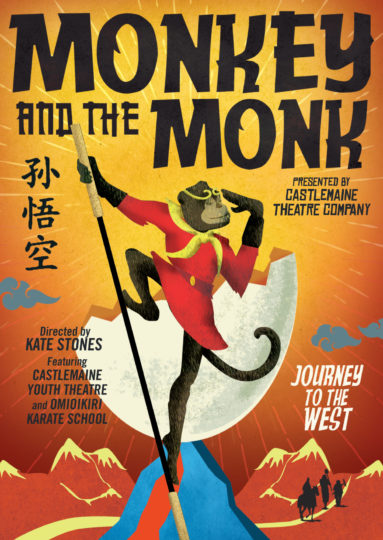 The Making of Monkey and the Monk documentary film

The Castlemaine Theatre Company’s production ‘Monkey and the Monk’ is a re-telling of a traditional Chinese legend, made famous in the 1980s by the Japanese TV series Monkey Magic, which achieved global cult status. Monkey and the Monk is a new kind of project for the CTC, with an expanded scope. We are working with 2 local youth organisations, local musicians Charles Affleck and Patrick Killeen have been commissioned to write an original score, director Kate Stones is creating an Education Program to accompany the show, and local film maker Karen McMullen is making a documentary of the process. The above Learning Guide document is part of the education program, and includes detailed background information and history about the story.

The Story of Monkey and the Journey West

The story originates from the true tale of Hsuan Tsang, a Chinese academic who travelled to India to bring back Buddhist scriptures, which he devoted his life to translating. He became a folk hero in China, and by the time his story was finally written down in the sixteenth century, he had acquired a band of trusty disciples to protect him on his journey in the form of the irrepressible Monkey (a streetwise, rebellious ape with a taste for a good fight and a dream of immortality and fame); Pigsy (a round fellow with a love of food and pleasure, the ‘Friar Tuck’ of the tale who most often ends up carrying the bags); and Sandy (a water spirit who waxes poetic and philosophic, dry and depressive – like Eeyore, from Winnie the Pooh). The four pilgrims set out to bring back sacred scriptures from the Western Heaven (India), assisted by Kwan Yin, Goddess of Compassion, along the way they fight demons and joke and argue constantly with each other. Monkey and the Monk is our very own home grown version of the story, adapted and directed by Kate Stones and featuring original music by Charles Affleck and Patrick Killeen, performances by the students of the Castlemaine Youth Theatre and the Omiokiri Karate School, with help from guest choreographers Sarah Cook and Flynn Patrao (Xtreme Inc/Movement Zone).

Sandy, an erstwhile cannibalistic water demon, is on the road to reformation along with his companions. Sandy is like Eeyore from Winnie the Pooh – poetic, thoughtful, philosophical, a glass half empty kind of guy.

The Jade King, Emperor of Heaven, a bureaucrat who doesn’t like to be interrupted at tea time

Tathagatha Buddha, the boss of everything

Yama King of Death, the boss of the Underworld