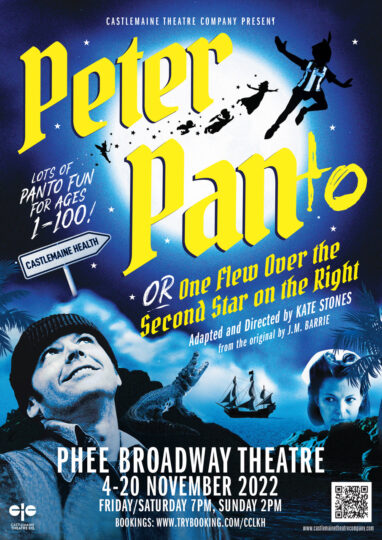 This is the story of Peter Pan told in the form of a Pantomime. Which means a Dame in drag, plus lots of opportunities for the audience to shout at the actors, local references and slapstick humour. A traditional aspect of Panto is that characters from different stories can show up. The script draws on One Flew Over the Cuckoos Nest to source a Dame (guess who!), and themes from the iconic movie/novel, are woven through the show (if you love One Flew Over the Cuckoos Nest, you’ll spot the references). JM Barrie will no doubt turn in his grave! We will also interrogate outdated aspects of the story, the ‘Redskins’ are replaced by The Castlemaine Magpies, our local footy team, the Pirates are all female, and Wendy is a child prodigy animal psychologist. Our story begins in the youth psych ward of Castlemaine Hospital…oh yes and there will be a few of your favourite songs – so be prepared to sing along!