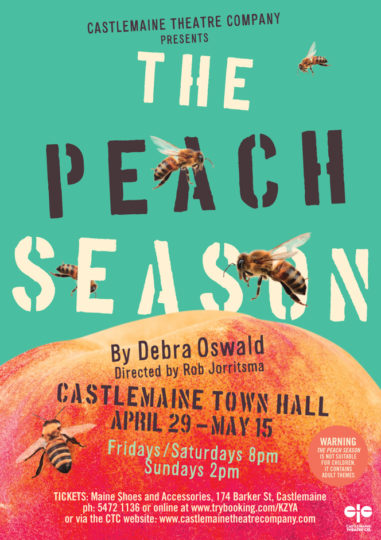 A contemporary Australian play evoking the heat, scent and hard slog of a peach farm at harvest time.

After the fatal shooting of her husband in a service station hold-up, Celia has shut herself and her 16-year-old daughter Zoë away, toiling on a peach farm in the middle of nowhere. When a desperate brother and sister turn up looking for picking work, it’s the beginning of the end for Celia’s safe existence.

Her daughter falls in love with enigmatic, erratic Kieran, but when the relationship is threatened, they run away together. The safe, perhaps smothering, world that Celia has created unravels; her paranoia and insecurities amplified to full volume. Playing out alongside her fear, we see the increasingly degrading and dangerous lifestyle that the two elopers have fallen into.

“Having a deep love of the classics, be it Greek tragedy or Shakespeare, I asked myself why I wanted to do Debra Oswald’s Peach Season. This is what I wrote in my journal: because it’s an Australian play. The script had been on my shelf for quite some time before I actually read it. I was instantly blown away. This was the play I wanted to do. It’s about personal relationships between the six characters: mother-daughter, first love, brother-sister, immigrants, drug use, crime, it’s all there; personal stories but recounting big themes.

For the last 15 years, theatre has been at the centre of my world. I finished a post-graduate degree in Theatre Studies, I worked with a community group called The Waldorf Players, bringing plays to the stage that excited us. At my work I directed a series of Shakespeare plays with year 8 students. I assisted in the background with the last two Castlemaine Theatre Company shows and now it’s time for my director’s debut with CTC”