The Tempest: A Sound Project 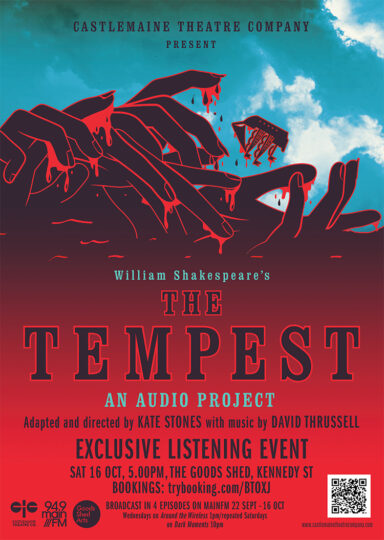 Directed by Kate Stones, with original music by David Thrussell.

Listen to The Tempest Podcast

“Listening right now to The Tempest. Marvellous! Sound design is beautiful and immersing. The shipwreck…stunning. Oh, and the music…fantastic! Very good performances overall and seamlessly embedded in the atmospherics. Congratulations!”

Created during the COVID year of 2021, this innovative project was inspired by a New York theatre company who created an episodic podcast version of Richard II. One of Shakespeare’s last works, The Tempest was first performed in 1611. It takes place on an enchanted island where a banished duke plots to get revenge on his usurping brother. In our version we have adapted the original script altering the gender of the main character, who now becomes Prospera, with her sister Antonia. This shifts the dynamic of the work, and enhances the subtlety of the characterisations. The tension between Miranda, the adolescent daughter of Prospera, a menopausal mother is palpable. The Tempest themes include power, illusion, revenge and reconciliation.

The themes of the plot revolve around a major act of betrayal, ill treatment, the development of magic arts and a plot of revenge.

Twelve years ago, Prospero was Duke of Milan. Being of a bookish disposition, he withdrew more and more into his studies, leaving the management of his state to his brother Antonio. Eventually, with the help of Alonso, King of Naples, and the King’s brother Sebastian – inveterate enemies of Prospero – Antonio usurped the dukedom for himself. Prospero and his baby daughter Miranda were put to sea in a rotten boat and eventually landed on a distant island once ruled by the witch Sycorax but now inhabited only by her son, Caliban, and Ariel, a spirit.

Since then Prospero has ruled the island and its two inhabitants by the use of magic arts derived from his studies. His daughter Miranda has grown up seeing no other human being.

Prospero divines that fortune has brought his enemies close to the island and he sees an opportunity to work his revenge. He uses his powers to raise a storm which shipwrecks them. When Miranda questions this, he tells her the story of their arrival on the island and assures her that no real harm will come to the survivors.

The shipwrecked travellers are separated. At Prospero’s bidding, the invisible Ariel directs their wanderings. He leads Ferdinand, the King’s son, to Prospero’s cell, where he and Miranda fall instantly in love. Prospero sets heavy tasks to test Ferdinand.

The King of Naples searches for his son, although fearing him to be drowned. Sebastian, the king’s brother, plots to kill him and seize the crown. The drunken butler, Stephano, and the jester, Trinculo, encounter Caliban and are persuaded by him to kill Prospero so that they can rule the island. However, Ariel manages to make mischief between them and they are soon bickering amongst themselves.

Satisfied that Ferdinand has met all his challenges, Prospero presents the young couple with a betrothal masque celebrating chastity and the blessings of marriage. He is distracted from this, however, when he remembers Caliban’s plot.

As Prospero’s plan draws to its climax, he vows that upon its completion he will abandon his magic arts. Ariel brings Alonso and his followers to the cell, and Prospero, in his own persona as Duke of Milan, confronts his enemies and forgives them. In the betrothal of Ferdinand and Miranda, the rift between Naples and Milan is healed.